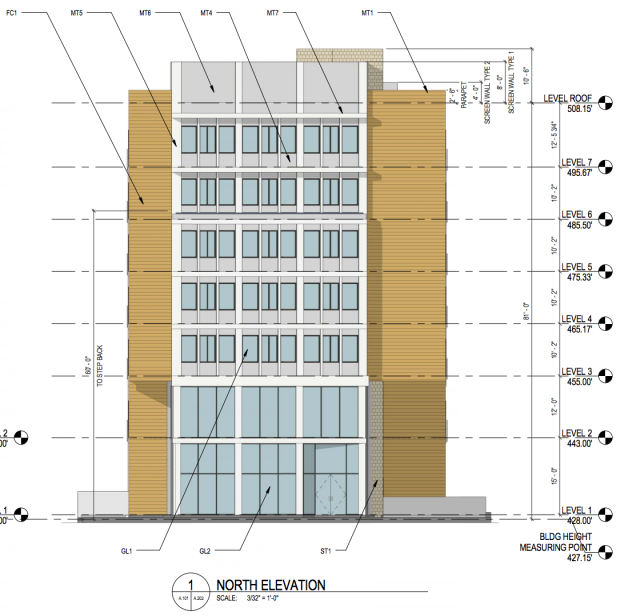 On Wednesday, December 13, 2017 at 7:00 p.m., the Rockville Planning Commission will be considering three new development projects that could add two houses and 310 apartments to the city in downtown and Lincoln Park.  Here’s what’s on the agenda:

1. 304 Frederick Avenue in Lincoln Park:  JJ Realty of Bethesda proposes to create two residential lots from a 11,428-square foot lot, which will require a waiver to allow a minimum lot area below 6,000 square feet in a R-60 zone. Because this subdivision consists of fewer than 3 lots, it is exempt from the APFO.

2. 50 Monroe Place in Downtown Rockville (currently a vacant lot adjacent to the Americana Centre):  RST Development proposes the development of an 81-foot-high/7-story building with 1300-sf restaurant, 8000-sf office for non-profit organizations, 70 apartments, and an underground garage on a half-acre of land located on the south side of Monroe Place, with a request to reduce the parking requirement from 91 to 40 spaces because of its proximity to public transit. The property is zoned Mixed Use Transit District (MXTD).  A majority of the apartments will be END_OF_DOCUMENT_TOKEN_TO_BE_REPLACED

Rockville Candidates Missing the Forest and Trees for the Rocks

Last week, I received the following email message from Joe Jordan, who is closely associated with Bridget Newton‘s election campaign:

Max, there have been at least two occasions where Clark Reed has been seen wearing a handmade name tag that reads “Rockville City Council – Clark Reed”. It was pointed out to him at the MPT showing on Friday, yet he wore it again at RTS on Saturday. Recalling two years ago, I recall how you were concerned about integrity and propriety and following election guidelines, and while nametags may not be covered under them, I am sure you can see how misleading his nametag can be.

Can I be confident in the fact you will bring this to his and Sima [Osdoby]’s attention, and ask that, at a minimum, he and all slate candidates use the wording “candidate for” if they are not incumbents.

Thanks for your attention to this important matter. 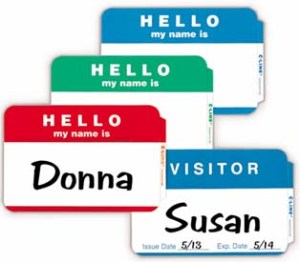 Mr. Jordan is correct that name badges are not specifically addressed in Rockville’s election code (although it addresses nearly everything else: “any pamphlet, circular, card, sample ballot, dodger, poster, advertisement or any printed, multigraphed, photographed, typewritten or written matter or statement or any matter or statement which may be copied by any device”) and that I value transparency, honesty, and accuracy in government (and in business and personal relationships).  I’ve passed his message onto the candidates of Team Rockville, but just to clarify, each candidate that is part of the Team is responsible for his or her own campaign (I don’t manage individual campaigns, just the Team’s; and this blog is mine, not the Team’s).

More important, though, I am growing increasingly concerned with the topics deemed important in this election.  Richard Gottfried sent out the first campaign mailer of the season and accused his opponents of associating with “fat cat developers” without providing any evidence.  On the Twinbrook Listserv a couple weeks ago, Brigitta Mullican complained about the inaccuracies in my blog post (I said Beryl Feinberg worked in the county’s office of management and budget) and that she wasn’t allowed to post comments, then recruited Beryl Feinberg to pile on:
END_OF_DOCUMENT_TOKEN_TO_BE_REPLACED

JBG considered various possible uses, including office, condo, and hotel, but in the current economic climate, the only ones that made sense were END_OF_DOCUMENT_TOKEN_TO_BE_REPLACED

With about thirty other residents, I attended the public meeting on the “Baltimore Road Intermodal Access Project” at Glenview Mansion on Wednesday night, February 3.  The City of Rockville is studying the entire length of Baltimore Road from the Town Center through East Rockville and Twinbrook to the city limits at Rock Creek.

A bit of background

Emad Elshafei, chief of traffic and transportation, opened the meeting by stating that Baltimore Road was studied nearly ten years ago but wasn’t implemented due to lack of funds.  In 2006, the City received a federal appropriation of $4 million spread over a series of years for planning and implementation (and the City needs to provide a 20% match).  The City also expanded the scope of the project to consider the needs to pedestrians and bicyclists, as well as connect to the new Town Square.  Earlier this year, the City hired Rummel, Klepper and Kahl (RKK) to lead the study, documentation, and planning with the assistance of several city staff members.  RKK is based in Baltimore and their previous projects include the Wilson Bridge and the Downtown Charlottesville Pedestrian Mall.

This public meeting is one of three planned prior to construction in summer 2011–if funding supports the project costs.  RKK is conducting a survey of the entire route and this meeting was merely to END_OF_DOCUMENT_TOKEN_TO_BE_REPLACED