JBG considered various possible uses, including office, condo, and hotel, but in the current economic climate, the only ones that made sense were END_OF_DOCUMENT_TOKEN_TO_BE_REPLACED

It was a bit warm this weekend, but still a great time to enjoy Rockville’s annual Hometown Holidays.  I love seeing lots of people downtown enjoying our fair city, and I also like to see what’s happening with restaurants through the “Taste of Rockville” (you may figured out I’m a bit of a foodie).  Lots of restaurants were there and the most exciting was Oro Pomodoro, who was making pizzas with a portable wood-burning oven.  Some people may be disappointed in the lack of variety, but participating in a “taste” event is very difficult–restaurants often have to stretch their resources to staff a second location for two days and then guess at how much food to bring.  Most do it as a community service and hope it will result in future customers–they rarely make any profit at these events.  Alas, the “tastes” were large and typically cost $5 so I only managed to try out three restaurants.  I hope next year they’ll include smaller menu items in the $1-3 range to encourage people to take a risk on something new.

There was plenty to do for families (which also meant lots of strollers to navigate) but adults could probably explore it all in a couple hours unless you enjoyed an entire performance.  The City did a great job of placing and scheduling bands carefully throughout downtown, but setting up all the stages and chairs also pointed out that we lack obvious community gathering places downtown (hardly any benches and shade trees arranged for a group of a dozen or more people).  Let’s hope the new buildings going up soon will solve that.

Although the name change was proffered as an incentive by the City of Rockville (really? really??), the staff report to the Planning Commission mentioned several concerns:

I’ll add a couple of my concerns: END_OF_DOCUMENT_TOKEN_TO_BE_REPLACED 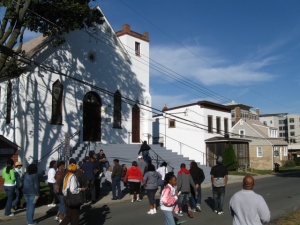 The City of Rockville has been working for nearly a decade to recognize the history of African American in the city and yesterday marked a major accomplishment with the installation of several interpretive markers in downtown.  Many people who shop, work, and live in the Town Square don’t realize it was once a thriving African American community which was demolished during the 1960s and 1970s due to urban renewal.  Today, very little remains and the plaques remind us of how much was lost–and also that African Americans have a long and distinguished history in Rockville.

Yesterday afternoon the City of Rockville hosted a tour on an incredibly beautiful fall day to visit some of these places and to see the new plaques, including END_OF_DOCUMENT_TOKEN_TO_BE_REPLACED