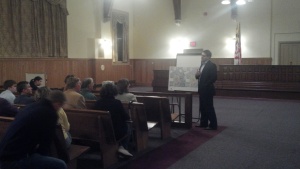 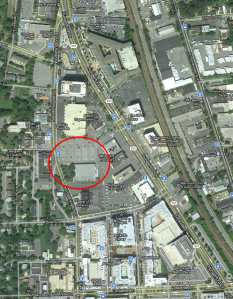 JBG considered various possible uses, including office, condo, and hotel, but in the current economic climate, the only ones that made sense were “independent living” with some retail.  “Independent living” are apartments exclusively for older adults (seniors) who are living without medical or domestic assistance, in other words, age-restricted, non-assistive residences.   They believe this is an ideal location for “independent senior” housing because it’s within walking distance of many desirable amenities, such as VisArts, county library, gym, grocery store, and Metro.  The result would be a project about 4-5 stories high (mid-rise buildings similar to the Town Center) with retail on the first floor and residences on the upper floors (similar to the Alaire project), filling the site to the sidewalks and look more urban than suburban.  Groundbreaking will probably occur in two years, but ideally it would be in one year if permits and plans are approved by the city in a timely manner.  Greenberg showed two conceptual plans–one of the ground floor and one of an upper floor–to show a possible layout of the parcel but no elevations.

Although this was an informal meeting and nothing has been submitted to the City, the project did elicit many questions from the audience, including the inclusion of green space (trees, grass) or a bandshell, avoiding a “fortress-like” design that’s isolated from the community, the taking of adjacent properties through condemnation, noise from concerts, and parking spilling out into adjacent neighborhoods.  Future official community meetings will be planned if the project proceeds, so stay tuned or inform Tony Greenberg at JBG (tgreenberg@jbg.com) if you’re interested in attending. 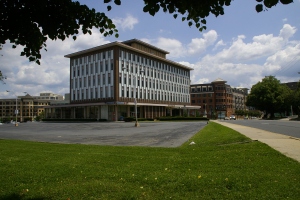 As an aside, I did learn a bit more about the status of the “mid-century modern” Bank of America/Suburban Trust Bank building at the corner of Washington and Beall.  It’s a bit complex but as I understand it, the land and building are owned by Cornerstone, Kettler manages the property, KSI Services has a lease for development, and is one of the half dozen PDPs (planned development projects) in the city (although it’s even more confusing because KSI Services changed its name to Kettler in 2006).  Plans to develop it for Town Center 2 fell through due to the economy and the site plan has expired.

I also learned that a Safeway is being planned near the Twinbrook Metro station–does that mean the nearby Safeway in the Twinbrook Shopping Center will close?  Wondering what else is happening?  The City of Rockville has a nifty map showing the locations of all developments in process.