Rockville’s Connections to Watergate on its 40th Anniversary 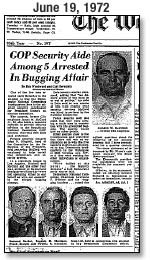 Sunday, June 17 marked the 40th anniversary of the arrest of five burglars caught in the offices of the Democratic National Committee at the Watergate in Washington, DC in 1972. Little did people know at the time that this burglary was actually part of a much larger effort by President Nixon to undermine his opponents and support his allies through threats, harassment, lies, fraud, sabotage, bribes, and crimes for many years. For those who aren’t familiar with the story, James McCord, Bernard Barker, Frank Sturgis, Eugenio Martinez, and Virgilio Gonzales broke into the offices of the Democratic National Committee to plant listening devices on the phones and in the rooms, as well as photograph financial records and donor files. When they were initially arrested, they gave false names and it was unclear who they were and who they worked for (there was some thought it might be Cuba) but two days later, Edward Martin revealed his true identity as James McCord of Rockville and that he formerly worked for the CIA. It quickly became apparent these weren’t burglars but spies–and they were working for the White House.  The Watergate break-in was one of several clandestine operations coming out of the Nixon White House and as Bob Woodward and Carl Bernstein stated in a recent Washington Post article, “It was only a glimpse into something far worse. By the time he was forced to resign, Nixon had turned his White House, to a remarkable extent, into a criminal enterprise.”  In addition to the five “burglars,” another 35 of Nixon’s closest aides and associates went to prison.  Nixon was pardoned by President Ford.

Few people know that Rockville, our fair city, had many connections to the incident that eventually led to the downfall of President Nixon. My research continues but at this point, there are at least a half dozen places in Rockville directly associated with Watergate.

1. James McCord, one of the five “burglars” or spies arrested at the Watergate, lived and worked in Rockville. In 1972, he provided security services as a consultant through his office in Room 220 at 414 Hungerford Drive, just north of Town Square. Among his clients was the Committee for the Re-election of the President (CRP), which was headed by Attorney General John Mitchell. The office building still survives and although it appears insignificant now, in the 1970s it was a major office building in Rockville.

2. The McCord home at 7 Winder Court still survives in a lovely neighborhood just west of downtown. When she was notified that her husband had been arrested, Ruth McCord picked up the surveillance equipment from a listening post across the street from the Watergate before it could be discovered and stored it in this house. When James McCord was convicted on charges of conspiracy, burglary, and wiretapping, he sent his famous letter from this house to U. S. District Judge John Sirica stating that several witnesses lied in their testimony to intentionally mislead the Court and that the crimes were much greater than assumed.  McCord states in the letter it was because he was afraid to tell the truth, but he had also been assured by the President (in the telephone booth in #4 below) that he would be pardoned.  This letter prompted the Senate Watergate Hearings chaired by Sam Irwin.  Some residents still remember the large numbers of reporters that swirled around the neighborhood to catch the McCords.  McCord later wrote about his role in Watergate in A Piece of Tape: The Watergate Story, which was published in Rockville in 1974.

3. Found on one of the spies was a check from E. Howard Hunt to the Lakewood Country Club for $6.36 for his monthly dues, providing an early clear link between the break-in and the White House. Hunt was also a former CIA agent and worked in the President’s Special Investigations Unit to spy, burglarize, steal information, and plant misleading evidence (one of his projects was to plant McGovern campaign literature in the home of the gunman who shot Gov. George Wallace in Laurel, Maryland). The other link was an address book left behind by the spies that included his name and a phone number with the initials “W. H.”—which later turned out to be the White House. The private Lakewood Country Club at 13901 Glen Mill Road still survives in Rockville and will only confirm that Hunt was a “non-resident member.”

4. James McCord made his calls to and from the White House from a telephone booth in the parking lot of the Blue Fountain Inn (a restaurant) on the Hungerford Drive. Younger readers: in the olden days before cell phones, if people were away from home or their office and they needed to make a call, they would look for a glass and steel closet-sized room along the highways or at gas stations that contained a payphone. From this phone booth, McCord received the orders to break into the Watergate and received assurances that he would be pardoned by the President if caught. The phonebooth was nominated as a historic landmark to the Maryland Historical Trust in the 1970s, but was rejected because it “could be easily moved.”  It’s now gone and the its former location is near today’s Cameron’s Seafood, York Castle Ice Cream, and Cuban Corner (ironically, three of the “burglars” were Cubans, who were duped into thinking they were working with the CIA to uncover Castro’s supposed support for the Democrats).  John Moser and Roald Shrack both remember the Blue Fountain Inn and thought it was a pretty good place to eat.  A few years later, the Inn was sold to Alexis Gossetto and Dominque Pavone, who turned it into a French restaurant called La Fontaine Bleue, perhaps the first gourmet restaurant in Rockville.

5.  James McCord purchased the electronic surveillance equipment in Rockville, an event that may have gone unnoticed except he paid $3500 in $100 bills–an amount that could buy you a decent new car in the early 1970s.  What’s unclear is where he bought this equipment.  Bernstein and Woodward claim it was a store called Watkins-Johnson Co., however, no such business by this name existed in Rockville according to the city directories.  The FBI files state it was Communications Electronics Inc., but no street address is provided.  It might be Watkins Electric Appliances at 15815 Frederick Road, which survives as a simple one-story retail store near King Farm.  One of the Watergate “bugs” may be in the Spy and Private-Eye Museum in Austin, Texas.

6.  A secret stash of funds in the White House paid for its clandestine operations, including James McCord’s.  Much of the Watergate investigation focused on who paid these spies, a trail that eventually led to the White House and also uncovered the complex criminal activities led by the President’s men.  The FBI discovered that James McCord held $10,000 in three different accounts at the Maryland National Bank, which had two locations in Rockville, both of which are now gone.  Another source claims that funds were also held at the Suburban Trust Bank (now Bank of America) which the FBI didn’t uncover, a building that still survives at 250 North Washington Avenue and is just a short walk across the parking lot from McCord’s office.

7.  Bob Woodward, one of the two journalists who continued to research and report on Watergate for the Washington Post, worked at the Montgomery County Sentinel the year before the “burglary”.  After a year at the Sentinel, the Post hired him as a reporter in September 1971.  The Sentinel stood downtown at 14 South Perry Street and was demolished to make way for the boring beige Judicial Center.

8.  When John Dean, Counsel to the President Nixon, was accused of being the mastermind behind Watergate in early 1973, he turned the tables at the Senate Watergate hearings by claiming that Nixon was part of the cover-up and for the first time revealed there were tape recordings of these meetings in the Oval Office.  Those recordings made it clear that Nixon was involved in Watergate and led to calls for his impeachment.  Two weeks before Dean’s earth-shattering revelations at the Senate hearing, he met with Senator Lowell Weicker at the Rockville home of Dean’s lawyer, Charles Shaffer.  Weicker sat on the Senate committee that was investigating Watergate and wanted to meet Dean and discover what he knew about Watergate, and later became close friends.  I’m still trying to locate Shaffer’s home and it may actually be in Damascus.  Charles Shaffer may be the only Rockvillian that was photographed by Richard Avedon and whose portrait is in the collection of the Metropolitan Museum of Art.  He still practices law in Annapolis and Woodbine, so I may give him a call to chat about Watergate and Rockville.

Wow, who would have guessed about the many links between the Watergate and Rockville.  If you have more information, stories, or details, please share them in the comments below or contact me at max.vanbalgooy@gmail.com.