Is the new Children’s Resource Center right for Twinbrook?

Montgomery County is proposing to add a new Children’s Resource Center (CRC) for the school district on the former Broome Middle School campus on Twinbrook Parkway in Rockville.  There have been a series of public meetings about the project and the County held its fourth and last meeting on January 25, 2014.  They presented four conceptual designs for the front elevations for review and comment.  About a dozen residents attended along with City Councilmember Beryl Feinberg and the chief of staff of County Councilmember Andrews.

Basically, the building consists of two blocks of different sizes joined by a tower.  The designs show different “skins” of a varying mix of materials and colors.  It’s not supposed to complement the existing Broome School because that’s slated for demolition and the replacement school hasn’t been designed, so I’m assuming the design of the CRC will set the pace for the new middle school.  The Gazette reported that the county believed that, “the people at the meeting seemed to prefer Scheme 2” but having attended the meeting, that’s a gross overstatement.  My sense is that we were still gathering information and had lots of questions.  There didn’t seem to be a preference for what we liked but rather what we didn’t like.  No one was enthusiastic about any of the designs, indeed, we discussed locating trees around the building to block views of it from the nearby houses (never a good assessment of a building’s architecture).

Now that I’ve had some time to think about this, here are my concerns: 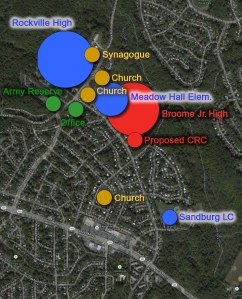 Institutional uses on or near Twinbrook Parkway north of Viers Mill Road in Rockville.

1.  The Children’s Resource Center needs to be examined in context, rather than by itself in isolation.  The conceptual designs showed the building by itself without any adjacent buildings nor with any measurements–it’s hard to judge the height or size without that information.  While described as a two-story building, each story is 15 feet high, so it’ll be closer in height to a three-story house.  Secondly, the CRC adds to a long string of institutional uses along this residential street. The City of Rockville allows churches and schools as exceptions in residential areas, and as a result this residential neighborhood may have the highest concentration of institutional uses in the city (see map).  Currently there are three active schools (in blue on map), two churches and a synagogue (in yellow), and two offices (in green) along or near this one mile stretch of Twinbrook Parkway and the County is proposing to add the CRC and another school (in red).   I suggested that the building needs to look less institutional and commercial because it sits adjacent to a residential area and Rock Creek, but this seemed to be dismissed as an impossibility.  I later discovered that the same architectural firm designed the Thomas Farm Community Center, so better design is clearly a possibility.

2.  Local children won’t be walking to these schools.  These facilities serve the region rather than neighborhood, so they will bring more traffic than usual.  For example, the existing Carl Sandburg Learning Center serves the entire county, thus each morning 20 buses from throughout the county transport students  here and another 20 take them back in the afternoon.  The renewed Broome Middle School will become a temporary school for the entire county, bringing an additional 30 busses to Rockville.  To get a sense of this, the map shows the location of all the institutional uses with the schools in blue (existing) or red (proposed) sized according to the total number of staff and students (Broome’s size is based on Julius West Middle School).  Remember, each of these schools has grown in size since they were first built (and many are over capacity), but the road capacity has not.  If the County builds the CRC, they shouldn’t build the new holding school unless it is accompanied by a corresponding increase in road capacity (and I’m not sure I’d like to see Twinbrook Parkway and Baltimore Road expanded to four lanes).

3.  In this brief meeting, my confidence in the county’s honesty and transparency diminished with each passing minute.  For example, they said the building would be two story but didn’t mention that each of those stories was significantly higher than most houses.  They said we should express our desires and that money wasn’t an issue, and moments later told us that a stone wall was too expensive.  They said they wanted to hear our concerns but then said the location and size of the building had already been decided and wasn’t up for discussion.  They said they eliminated the fire access road through the forest as requested at a previous public meeting, but said it could be reinstated by the fire marshall. Although they laid out their criteria for selecting a site for the CRC and holding school, it didn’t seem to jive for this particular location.   For example, the County insists that they need to be centrally located, but Twinbrook isn’t central in the county but Shady Grove is–and it’s much closer to major transportation routes and land is available.   Each time the county representative said, “we would never do anything to harm the neighborhood,” I  grew increasingly cautious and felt like I was being sold a used car or patted on the head.  I don’t feel like I’m being given sufficient information to make a thoughtful and reasonable decision, indeed, I kept feeling that they were intentionally withholding information.  Perhaps that’s not the case, and if not, county staff has to get more training on facilitating public meetings.

If you have comments or concerns

a.  Send comments in advance to the Rockville Planning Commission or speak at their meeting on February 12 (doublecheck the agenda; this date may change).  The City Planning Commission will determine if this project aligns with the City’s Comprehensive Master Plan.  Be aware that the City’s jurisdiction is very limited–school districts typically trump city decisions.  The planning commission must approve “the location, character, and extent of the development as consistent with the [master] plan.”  I don’t believe this project fulfills our land use policies (“new development should positively impact the quality of life for existing resident” page 2-1) nor the Twinbrook Neighborhood Plan (this land is zoned R-90 residential and on page 25 the plan recommends,”Retain existing land use and zoning for the churches and schools throughout the area.  If the sites should redevelop in the future, they should be retained for single-family residential uses.”  Furthermore on page 72, “this Plan supports the existing County service center at Lone Oak but recommends that no additional County service centers be located in the Twinbrook neighborhood.” )

b.  Contact County Executive Ike Leggett with your concerns or comments because this project is being handled by his Department of General Services.  The County Council (our district is represented by Phil Andrews) has no jurisdiction over the CRC (see comment below from Phil Andrews’ office).

c.  You can send comments to the Rockville City Council, but they’re really not involved.  This is a county project and only involves the city’s planning commission.

d.  You can send comments to Montgomery County Public Schools, but frankly, it doesn’t seem the school board or superintendent gets involved in details like this.  In this case, they’re letting the County run ahead with the plans (I don’t think anyone from the school district was even in attendance at the meeting or even knows this CRC is planned for Twinbrook).