A Most Unusual Election

This year’s Mayor and Council election in Rockville is extraordinary not only because Election Day has turned into Election Month due to vote-by-mail, but also because so many new, unusual, and strange campaigning is happening. You’ve probably noticed a few of them but when you bring them all together, you realize this election is very different from its predecessors.

The number of candidates is the largest in recent memory and I’m not sure what’s prompting it. Running for office is grueling and costly. Maybe there’s a gut feeling that the city is being pulled in several directions and people are jumping in to influence the outcome or that there are two slates (which was common twenty years ago) plus the usual unaffiliated candidates.

A security camera in Rockville captured this man leaving candidate literature in the door and checking out the contents of the mailbox.

We’re now at the time of the campaign when yard signs become a point of contention. During the day, fanatics will confront homeowners who have signs of their opponents or in the dead of night, steal signs and blame it on teenagers. This election is different because many homes have motion-activated security cameras, making it easier to catch misbehavior on video. Recently posted on Twinbrook Neighbors, a camera caught a person tucking candidate literature into the door who also seemed to go through the resident’s mailbox. And he wasn’t a teenager.

Thanks for the View!

I was saddened to learn that Rockville View, a regular blog fed by Cindy Cotte Griffiths, will cease this summer due to the increased cost of insurance for websites. She promises, however, to “keep you all informed and will continue in an email newsletter format.”

Keeping the community informed about local news from special events to crimes to Council meetings is a tough job, especially as a volunteer.  It takes more time than anyone can imagine, although it looks so easy to do.  A few paragraphs and a photo can quickly consume several hours (and I’m speaking from experience).  So a big thanks to Cindy and all of the other community bloggers who keep us informed (even if I don’t always agree with you) because you’re helping to fill a big hole left by the closing of the Gazette.  Bethesda Magazine and the Washington Post still haven’t managed to provide the coverage that Rockville deserves (geez, it’s one of the largest cities in the state and the county seat of the most influential counties in the U.S.).

Cindy Cotte Griffiths, local resident and co-owner of the much-beloved (but long-gone) Rockville Central, has launched a new blog to cover local news called “Rockville View.””When The Gazette closed up shop, we lost balanced and professional coverage of our news and elected officials in Montgomery County,” says Cindy.  “Without a local paper, we need watchdogs in our community who can bring issues to light. I’m hoping members of the community will join me to provide this coverage and keep us all informed of the facts. Think about it as sharing around the Rockville ‘water cooler’.”  Some of you may know her from her years of service on the city’s Traffic and Transportation Commission and Human Service Advisory Commission or the PTSA at Richard Montgomery High School.  You can visit Rockville View to keep up on the news but you can also follow @Rockville on Twitter or subscribe to the Weekly View newsletter delivered to your inbox on Friday afternoons ($2/month, $10/six months, $20/year). Subscribers can also submit events to the calendar.

I’m delighted to have her join me again on the Internet Super Highway and expect her coding and writing skills will leave me in the dust.

A Year Without Rockville Central 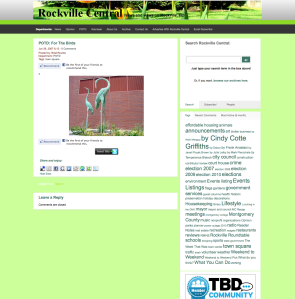 I hoped for a Christmas miracle, a new year’s resolution, a resurrection, but I guess it’s not happening–Rockville Central has truly closed its door for good.  Started in June 2007, it was an ongoing grand experiment in creating an online community that developed  a strong local following and attracted national attention.  Yup, 2007–ancient history on the internet (recall that Flickr launched in 2004, YouTube in 2005, and the iPhone, Droid, and Kindle all came out in 2007).  Brad Rourke and Cindy Cotte Griffiths independently thought of using social media to create a virtual community and then came together to produce and manage Rockville Central.  It started with a Picture of the Day (one of Brad’s signature elements) and that first month included stories about:

Over the following years, it had grown, matured, and morphed by producing an internet radio show and YouTube videos, plotting police reports and real estate listings on maps, collaborating with other online communities (such as Lunching in the DMV and Rockville Living), reporting on City Council and other community meetings, creating editorial cartoons (one of Cindy’s signature elements), welcoming guest opinions and contributor reviews, hosting Rockville Roundtables and a City Council debate (one of the best), and moving to Facebook.

It’s amazing what they accomplished in four years but for two volunteers, it was difficult to maintain the pace and they just became too tired to continue.  I know the feeling, which is why I post at a much lower pace.  As they said in their last post of October 14, 2011 at 3:43 am (am!?):

It takes a great deal of energy and time to support the online community in the way we feel it deserves. We do not make money off of Rockville Central, and never intended to. It is a labor of love and devotion to Our Fair City. We don’t feel we can devote the kind of energy it deserves and so, rather than let it whither, we decided to make a clean end.

Rockville Central helped identify the important news in the community, facilitated discussions in a civil and respectful manner, made us see our town in new and interesting ways, and introduced us to the many thoughtful and socially-active people who live in Rockville.  I’ll miss Rockville Central this year, but thankfully, Rockville still has Brad and Cindy.