The message on Facebook asked readers to “Please support our member Kuan Lee who is running for the City Council of Rockville. Also, please join/renew the Rockville Sister City Corporation (RSCC) membership to show your support.”

RSCC President Drew Powell assured me that Rockville Sister City did NOT endorse Kuan Lee, nor would it endorse any candidate for elected office.  It remains confusing, however, because Kuan Lee is a member of the RSCC board, the Facebook post urges support for RSCC, and Drew Powell is a longtime vocal supporter of Bridget Newton, Lee’s campaign colleague. RSCC can’t control what other people say or imply about them, but I suspect they will have a heated discussion to sort this out and clarify their role in the election and this debacle at their next meeting.

In the meantime, a closer look reveals that the Facebook post was made by the Rockville-Yilan City Corporation. Never heard of it? It was incorporated in Maryland in 2017 by…wait for it…Kuan Lee and operates from his home in Rockville.  Yup, Kuan Lee endorsed himself in the disguise of a charitable organization. 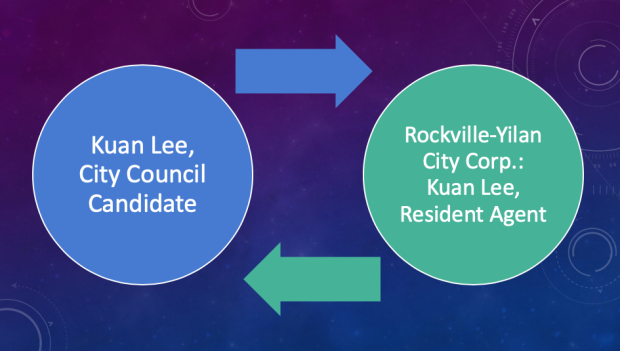 There are so many things wrong with this, but let’s just list a few that are most important to Rockville voters:

Bridget Newton, Beryl Feinberg, Monique Ashton, and Suzan Pitman have joined with Kuan Lee in the upcoming election.  Will they continue these types of deceptions or will they put a stop to it and give voters the truth and transparency they demand? 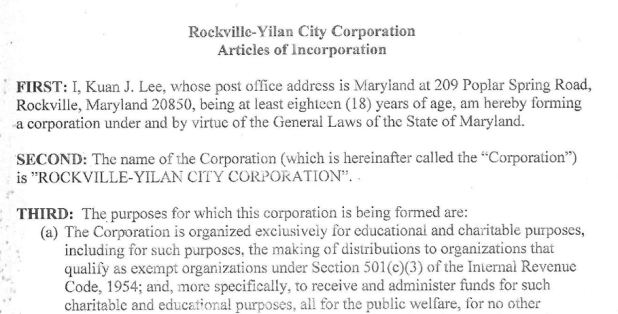 Articles of Incorporation for the Rockville-Yilan City Corporation, formed by Kuan Lee.