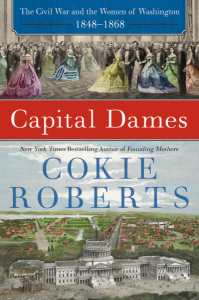 The Sandy Spring Museum will host Cokie Roberts, nationally recognized political commentator and prolific author, on Tuesday, February 23 at 7:30 p.m.  Roberts will be discussing her recently published book, Capital Dames: The Civil War and the Women of Washington, 1848-1868, and will be available to sign copies.  In this engrossing and informative companion to her New York Times bestsellers Founding Mothers and Ladies of Liberty, Cokie Roberts marks the sesquicentennial of the Civil War by offering a riveting look at Washington, D.C. and the experiences, influence, and contributions of its women during this momentous period of American history.

With the outbreak of the Civil War, the small, social Southern town of Washington, D.C. found itself caught between warring sides in a four-year battle that would determine the future of the United States. After the declaration of secession, many fascinating Southern women left the city, leaving their friends—such as Adele Cutts Douglas and Elizabeth Blair Lee—to grapple with questions of safety and sanitation as the capital was transformed into an immense Union army camp and later a hospital. With their husbands, brothers, and fathers marching off to war, either on the battlefield or in the halls of Congress, the women of Washington joined the cause as well. And more women went to the Capital City to enlist as nurses, supply organizers, relief workers, and journalists. Many risked their lives making munitions in a highly flammable arsenal, toiled at the Treasury Department printing greenbacks to finance the war, and plied their needlework skills at The Navy Yard—once the sole province of men—to sew canvas gunpowder bags for the troops.

Cokie Roberts chronicles these women’s increasing independence, their political empowerment, their indispensable role in keeping the Union unified through the war, and in helping heal it once the fighting was done. She concludes that the war not only changed Washington, it also forever changed the place of women. You can listen to her interview about the book on the Diane Rehm Show.

Tickets for the book discussion and signing are $30 ($25 for members) and can be purchased in advance online.  If you want to meet Cokie Roberts, the event will be preceded by a special reception for museum members. The Sandy Spring Museum is located at 17901 Bentley Road in Sandy Spring (near Sherman High School), just ten miles west of downtown Rockville.

If you’re not familiar with the museum, it hosts a variety of events and programs for the local community as well as provides studios for new and established artists.  Coming up on January 22 is a History Happy House on recreating historic beers and on February 12 is a Jazz in the Round concert featuring pianist Mark G. Meadows.