Rockville Central on Facebook: A Step Forward, Back, or Sideways? 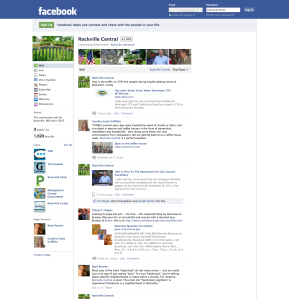 Six months ago, Brad Rourke and Cindy Cotte Griffiths moved Rockville Central from a standalone web site to Facebook to both go where most of their readers were and to allow for more convenient interaction among readers.  Founded in June 2007, within a couple years Rockville Central had become one of the top five local blogs in Maryland, but now that it’s moved entirely and exclusively to Facebook, how has it fared?

The move to Facebook has generated national attention, including the Washington Post, Huffington Post, Poynter, Media Bistro, and the Neiman Journalism Lab at Harvard University.  The articles tend to be struck by the “Facebook exclusive” venture and it’s potential as a model for other community news organizations (e.g., “Industry leaders and media analysts say news organizations have not yet fully exploited Facebook for its total worth,” noted the Washington Post).  On the other hand, reader comments often raised concerns about the quantity and quality of news, the inability to earn revenue, that Facebook doesn’t appeal to everyone, and the inflexibility of Facebook’s look and feel.  Some feel the move to Facebook wasn’t newsworthy–so many organizations and activities already have a major presence on Facebook.  Here’s where I think things stand:

So Rockville Central has moved to a new house and some people seem pleased by the new location, and others not so much.  It doesn’t appear that they’ll be moving out of Facebook anytime soon (but life on the Internet is always changing; will Google+ become the next social media platform?).