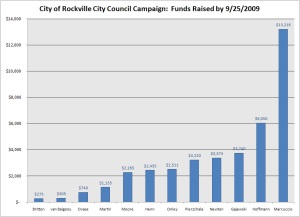 Funds Raised by September 25, 2009 in the Rockville election.

The first round of financial reports were submitted on October 1 and based on funds raised by September 25, I’m officially an underdog! Finally, I know where I stand in the race and can act accordingly.

Early in the campaign, I found myself continually fussing over small details to ensure I would garner a stranger’s support and avoid offending anyone.  Should I sign my letters in blue or black ink? Thick or thin pen?  How should I state my opinion on Town Square parking, Red Gate Golf Course, or the series of tax cuts? But now that I’m an underdog, I feel liberated!

Years ago I was talking with a wealthy philanthropist about his success, when he mentioned that one of his best decisions was to enter the stock market in the early 1930s.  I was surprised and said,  “During the Great Depression? Wasn’t that the worst time to invest in stocks?”  “No,” he replied, “It was the best time because the market was at the bottom.  It could only go up.”

So here I am near the bottom and delighted by the prospect of speaking more freely and challenging the other candidates without worrying about losing ground–there’s none to lose!  It’s going to be fun.

Oh, and just a caution about campaign finances.  You do need money to campaign and get your message out to the voters.   In Rockville, you need about $5000-$10,000 to run a good solid council campaign with rackcards, a mailer or two, and yard signs.  No money is a bad thing but the opposite is not true.  As Roald Schrack has shown in the 2007 election, Piotr Gajewski received the most votes but another candidate had spent twice as much money–and lost by nearly half as many votes.