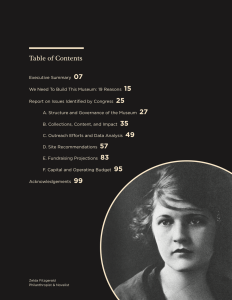 Philanthropist and novelist Zelda Fitzgerald, wife of author F. Scott Fitzgerald, is prominently featured in the new Report to Congress and the President of the United States on the American Museum of Women’s History. Few people know that Zelda and Scott are buried (should I say “sleeping”?) in St. Mary’s Cemetery in Rockville (it’s even listed in the Atlas Obscura) and even fewer know that it was Zelda who insisted that Scott be buried in the family plot when he died in Hollywood in 1940.  Zelda was living at a sanitarium in Asheville, North Carolina, and too ill to attend his funeral but tragically, she would join him eight years later after dying in a fire at the sanitarium.  Because the Catholic church denied his burial at St. Mary’s, the Fitzgeralds were buried in the Rockville Cemetery in Twinbrook. They were moved to St. Mary’s in 1975.

As for the American Museum of Women’s History, the report recommends it become part of the Smithsonian Institution and present a “wide spectrum of American women’s experiences in a way that appeals to a diverse audience.” They’ve identified a fundraising goal of $150-$180 million from the private sector for construction but the museum is only feasible if there is public support to provide the land somewhere near the Mall (three locations were suggested) and that the government would operate and maintain the museum. I wonder how the new President and Congress will respond?